Yes, good things happen when you get involved with PMI by Naeri Masihi

In 2019 when PMI Global celebrated its 50th anniversary and PMI Bulgaria Chapter marked its 10th anniversary one of the aspiring PMP certified professionals in Bulgaria, Naeri Masihi, took on the role of a Project Manager of Project Management Summit Bulgaria 9th Edition, the biggest conference dedicated to project management in Europe in 2019.

Naeri defines this career change and involvement in PMI Bulgaria's volunteering activities as an unexpected but sought-after development. Inspired and fascinated by the event in 2017, especially by the fact that all the magic was realized by volunteers, she left with the firm conviction that next year is her turn to contribute as a volunteer. A few months later, she was already part of the PMDAY 2018 organizational team and delivered value as part of the Logistics Team. For her work on the project in 2018, Naieri shares: "I found the greatest personal satisfaction when I looked at the 599 event attendees at Sofia Event Center and saw many celebrities. I was already part of this community."

Winning the trust of the organizational team and the PMI Bulgaria Chapter Board Naeri was nominated and invited to take on the PM role and lead the project in 2019, a project charged with high expectations to preserve the interest and success from previous years. As Naeri said: "I accepted and took this job as a project from the beginning. We initiated, planned, executed, and delivered the final product, following the necessary processes, accompanied by tailored management techniques during each phase of the project. I entered the project with the request that I was here to study, and the PMI Bulgaria Chapter gave us the perfect environment and environment in which I and a team of 29 project management professionals could experiment, learn and share experiences". Commenting on the international response and recognition, she said, “We are getting bigger because we are setting high goals and not betting on the old and the already known. When your team is made up of individuals with a strong position, curious, seeking and constantly pushing the limits of their capabilities, the result is the Biggest Project Management Conference in Europe. In 2019 Naeri and the Project Management Summit Bulgaria team brought many innovations and had to deal with unknowns: PMDAY rebranded, a new venue (the National Palace of Culture), higher attendance and many more.

"Success is not accidental. It is also not a matter of luck. Success is planned! " Naeri continues. She acknowledges that her involvement and the opportunity to dedicate 9 months to this project and to invest nearly 1,500 hours of volunteer work would not have been possible without the full support and understanding of her company, immediate manager and family. 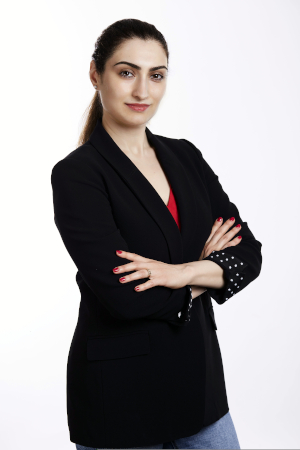 Naeri is extending a thank-you note to the team of volunteers - nearly 30 professionals not only full of many great ideas, but also responsible and having the courage to implement them. Room for improvement is always there, so the only way to add your personal touch and professionalism to it is to join the PMI Bulgaria Chapter volunteer team today, so get in touch with us!