What is an Office: The Phoenix That Died a Million Times 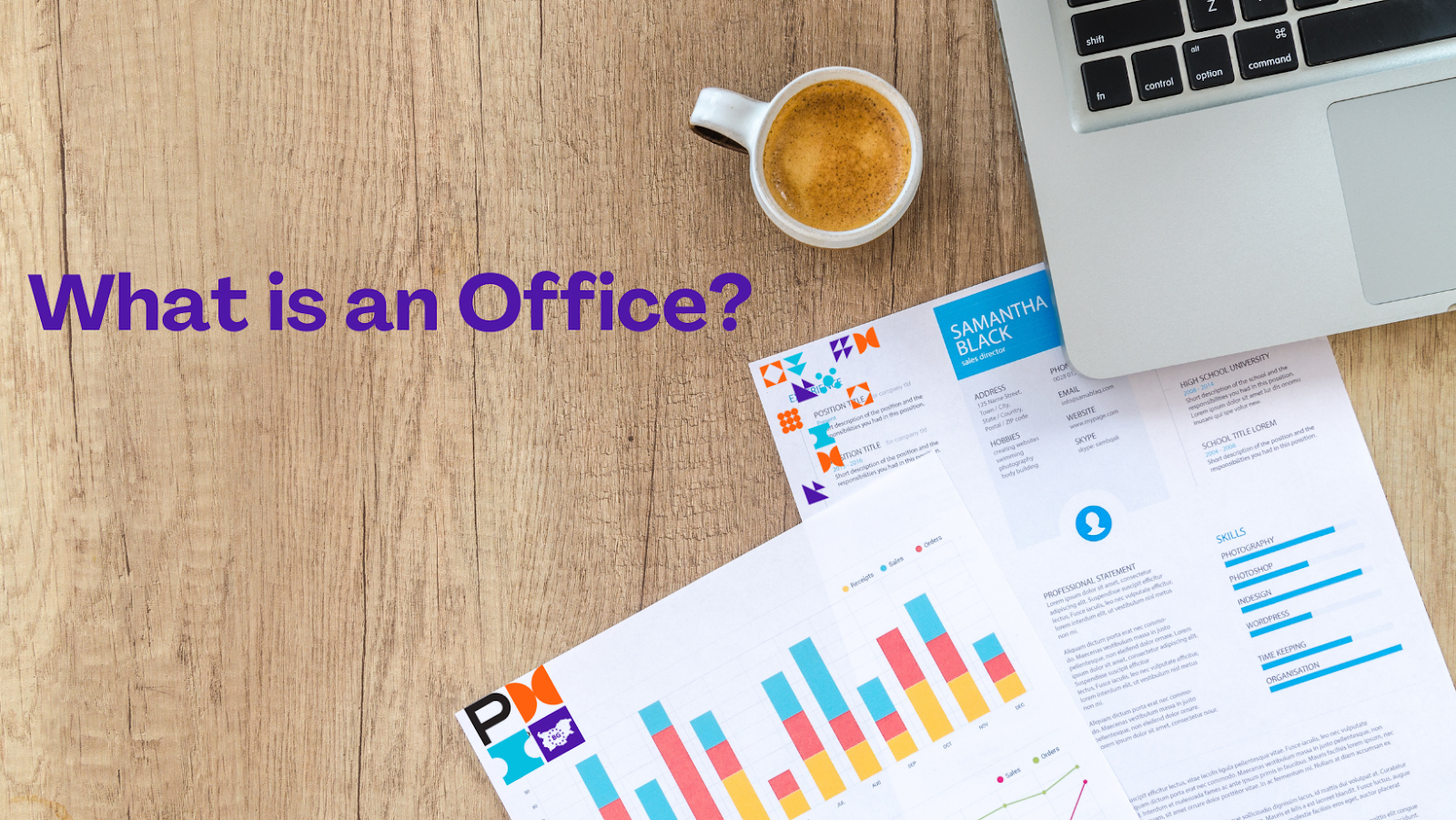 We used to plow the earth. Not much to wonder about. No “can I do it from home?” or “isn’t it better if we only have two office days?” or “won’t I be more productive with a four-day workweek?”. No - if you wanted food, you had to plow the earth, today and every day. As awful as this sounds, as limiting and breathtakingly hard, it was also a source of clear meaning and purpose. The meaning of life was to create life and to sustain it - a predefined scenario for clear action that consumed all our capacity and time on Earth.

Today “meaning” and “purpose” have a much broader scope. Enmeshed in big networks, we create for the broader society. We have the freedom and the luxury of crafting our meaning. More recently, we have been given the opportunity to decide how and where we do that. Abruptly kicked out of our offices, we were forced to adapt to a new way of “doing what we have to” that led us to question “what do we really have to do?”. We had to focus on our goals and deliver from wherever. Slowly but surely, the realization that working is not interchangeable with being at a particular place for a predefined amount of time. The natural next step was to question the existence of the office.
The battle to break the office shackles is on. Caught-up in the heat we tend to forget the logic behind “An Office”. Let's take a quick dive here.

Where We Used to Work

We trace office work to ancient Rome. Managing an empire involved a lot of administrative work and tracking - amount of crops available, silver traded in the last two years or the number of men subject to military duty - it all had to be noted down to allow comparison and decision making (oddly familiar, isn’t it?). The work was handled by a caste of high ranking clerks called scriba. Their version of the office was called a library and resembled a temple. 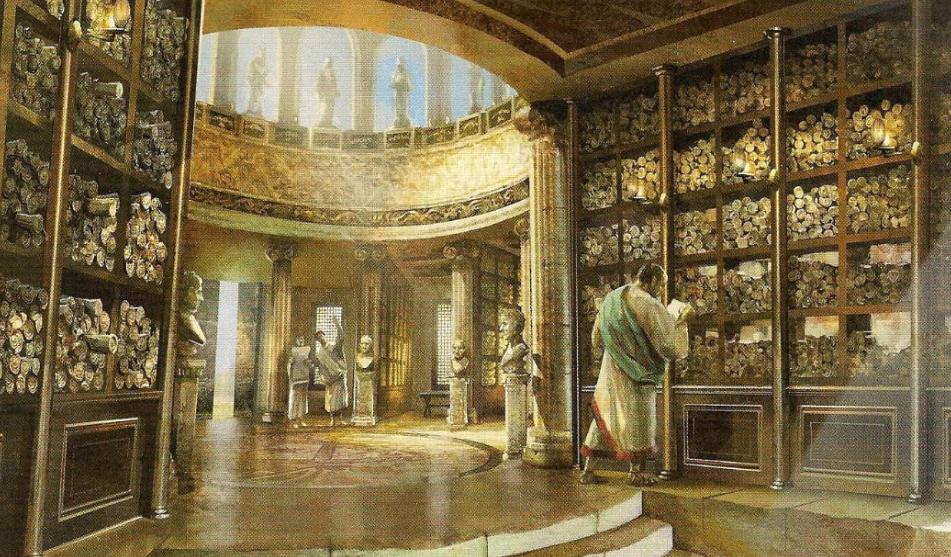 The library of Alexandria

For a long time after its inception, the office was a place to focus (the Scriptorium where medieval monks copied scripts) or administration. The need to centralize management of the British navy gave us the first purpose- built office building - the Old Admiralty Office (1726). 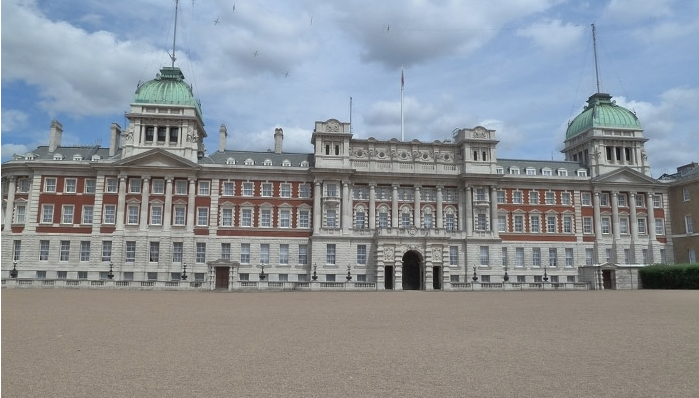 The Old Admiralty Office
Image credit: Cary Bass-Deschenes
Other than the needs of government administration or a limited number of big corporations (notably the East India Company) the office was not a popular idea. Medieval and Renaissance blacksmiths, bakers, shoemakers, potters or calligraphers did not separate work from life, neither did they split it physically. Work was done in the same premises where the family ate and slept. That was perfectly in tune with the era that did not offer means for prompt transportation and communication beyond one's neighborhood or village.
The classic idea of an office - working from 9 to 5 with tools provided by the employer in central premises arranged for the need are driven by two historic shifts. The first is the industrial revolution - tools were no longer available at home and cooperative work on the factory floor had to be enabled by schedule. The second big leap (1911) is the adoption of management ideas of the mechanical engineer Frederick Winslow Tylor. Taylorism taught business leaders that to maximize efficiency (and thus throughput) they had to describe (map), measure and optimize their processes and train their employees. The office started resembling a farm, enabling maximum surveillance and close managerial control. Arguably the time when work lost its soul. 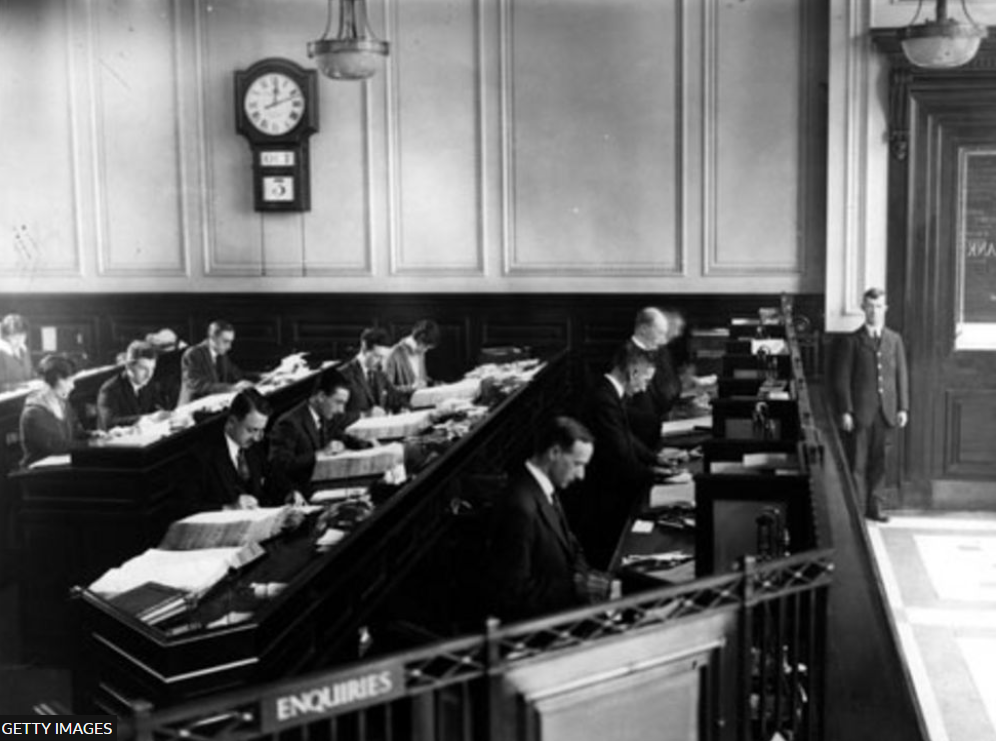 The office inspired by Scientific Management

This is a point in history to which we can track the cracks of the divide between Employee and Employer. Earlier in the history of work those two figures were the same person. Goals did not have to be clarified - they were self-defined. Work did not have to be measured or scheduled because efforts were self-driven. Even a sense of accomplishment was easier to get when you saw the product of your work finished and sold for your profit only. Leap forward to paid work and it all changes. You are told what to do and when to do it. Often what you create is a small bit of a big project (or even intangible as company culture) and you don’t get to see its “end product” at all. As a result we often see reduced productivity, low morale and short- term thinking.
Things have changed a lot since the 1900s. Manufacturing efficiency gave way to intellectual achievement as a main business advantage. Employers now depend on the mental productivity of workers and results are not measured in the same way. The evolution of ideas for cooperation led to the inception of the Open Office - the most popular type of work environment before 2020. The first open-office building can be traced back to the reputable Frank Lloyd Wright. The Larkin company manufactured soap products for middle class consumers and its managers believed in the moral value of work and a familial company culture. The enduring heritage of the Larkin company turned out to be its managerial philosophy.

There is an indestructible link between what work is and where it is done. This link led to the different versions of the workplace we saw through our history. This is also one of the likely reasons for the friction we see today between the institutions of the Home and the Office. Once more it is possible to work where you live but this is not merely a question of where we do our job. It is a question of how we divide our time and attention, what is the real value of our work and how it is measured and even should we continue doing what we do. At the end of the day (as my dad told me on my first day at work) you can earn 5 bucks the hard or the easy way. I would argue that what you deem too hard is determined by your motivation.
We still ascribe big value to the office. 26% of the young respondents in a survey said that they would quit if the social aspect of their work is taken away and the office is still seen as the place to go to understand the complexities of your organization’s culture. The key here is that there wouldn’t be a one-size-fits all solution for the future of work. The needs of a fresh graduate who requires a lot of mentoring and socialization are not the same as the needs of a seasoned mid-age senior worker who is also a caregiver. Those two groups seem to be edging at the two extremes of office presence preference but the thing is that you need to address both. Early analysis says there is a way to do it. An obvious solution is to offer “something-in-between”. The hybrid model of work that seems to be addressed at demonstrating the will of the corporate world to compromise. Hosting fewer employees and for different reasons the office should change a lot. Few trends come to the fore in shaping the future of the office:
The future office is a place for collaboration that respects health and wellbeing. It lures the employees into being there with exquisite premises. It defends its right to exist as a benefit for those who would like a comfortable space for collaborative work and the extreme spectrum of introverts that want a well equipped quiet place to focus. 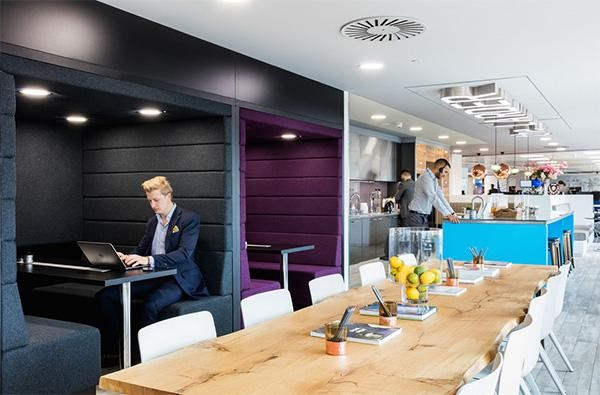 A place where you want to be
Source: https://eni.co.uk/blog/new-office-design-trends-2017/

Find the Balance in a Hybrid Organization

This period of the evolution of work is marked by change. It’s just that there are so many PROs and CONs and so many psychological elements involved that we are not certain yet where it all ends. Having to navigate in this environment we may be faced with the challenge to lead teams through the fog. We might as well finish this story with a few useful hints (to make the time invested count).

Start with WHY
The abrupt change of our regular patterns that the pandemic brought drove many people to deep reevaluation of their priorities. It is worth restating and clarifying objectives with people in your team. It’s best if those objectives do not stop on an individual level - go sky high. Move through the impact on company strategy to the link with greater benefits. One example - if your team develops integrated circuits for electric cars, emphasize the environmental impact of their achievements.

Communicate the process
It’s been difficult to create a routine in the last couple of years. Back and forth on decisions for mandatory hours in the office have been unnerving for those trying to work-out an efficient regime (or even buying a home). Have mercy and clearly communicate what you expect - how often, which days, on what occasions via which tools. Do not expect people to figure out on their own how they should work together because they will surely come up with a way - it just may not be the one you would like to promote.

Even the playing field between home and office
There is one little detail that you might miss if you are too focused on the “home VS office” dilemma. The decision itself is only the start of a deep shift in organizational workings. Keeping the “old habits” would only hamper performance. The modern illness of the hybrid office is the “two-class workforce”. It separates an elite, which is perceived as more dedicated and deserving of recognition (via promotion or bonuses) from the “slackers” that are working from home. To avoid this pitfall one should consider the deep shifts we have discussed throughout our review and recognize remote working as a natural evolution that has only been accelerated by this pandemic.
Conder every aspect. There are two good places to start:
Create radiators
One idea strikes me when I read about remote work. The final blow will be dealt by the availability of easily accessible and personalized information for each individual. There are two layers of this idea. There is the obvious - quick access to information optimizes work and reduces the need of endless meetings. There is a deeper level though. Adapting the information flows is a dedicated effort to make life for remote workers easier. It shows that the organization is not merely trying to survive while it can roll-back to its old way of working but actually investing in a long-term shift.

As Project Managers and intellectual workers today we are privileged. We no longer have to plow the earth for food. Our meaning and purpose come from many values. We live to look and learn. We live to strive and create. We hope for a modern society and invest our time and efforts in it. We build families, communities and engineering wonders. We want to be able to do all of that and a 9-to-5 office no longer reflects this need. It turns out that we have embarked on a journey that will hopefully lead us to a place of equality, purpose and achievement. That’s on us.