For today’s Success story, our guest will be Svetla Georgieva.

Svetla is a Senior Project Manager with more than 11 years of experience in the IT sector. She has participated in and managed software development and system integration projects of different scales for Banking and Finance, Telecomm, Healthcare and Insurance, Public Administration and Government. A devoted PMI Bulgaria volunteer since 2014, she has contributed to a large number of projects, including the organization of 5+ PMDAY / PM Summit Bulgaria conferences.

Svetla is currently a Senior Project Manager at ScaleFocus, one of the fastest growing Bulgarian IT companies, and a Vice-President for Sponsorship at PMI Bulgaria. 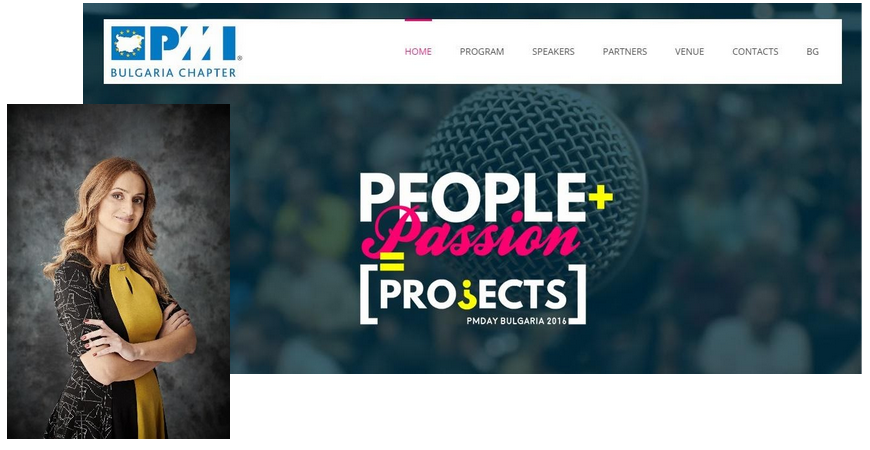 A draft motto for PMDAY Bulgaria 2016 Conference
Svetla describes the beginning of her volunteering experience: “I would rather describe my story with PMI as a long and very exciting journey”. Svetla says it all started in 2012 when she obtained her PMP® certification. During the PMP® preparation course she heard about PMI Bulgaria Chapter from her trainer, Elena Gerdjikova, also a PMI Bulgaria volunteer at that time. Then in 2013 Svetla visited for the first time PMDAY Bulgaria conference, the annual PMI Bulgaria Chapter’s event, which since 2019 is known as Project Management Summit Bulgaria. “I liked it so much!” she exclaims and then adds: “I stayed after the official closing of the conference and had a talk with the Project Manager of the Organization team, who happened to be Elena Gerdjikova”. Svetla still remembers quite lively that moment: “We sat on a couch, Elena took her high heels off, she seemed exhausted, but at the same time so happy and satisfied with the event, which just ended.” Then Svetla told her former PMP® trainer that she definitely wanted to participate in the next year organization team.

Indeed, in 2014 Svetla joined the PMDAY Organization team and worked in the Speakers team, which was responsible for speakers’ selection and the development of event’s program. “It was such a great experience! So I decided to volunteer once again.” Svetla recalls smiling. In 2015, she had led the Speakers team and became a Conference Host at the day of the event. Without any hesitation, Svetla adds: “I have to thank Mariana Mikova, who was the Project Manager of the Organization team in 2014 and 2015, for winning me as a volunteer.”

Special moments from PMDAY Bulgaria 2015 Conference
She continues further to say what excelled her relationship with PMI explaining that, at the time when she joined the organization of the annual conference, the Project Management profession was relatively new in Bulgaria. During the events in 2014 and 2015 she realized that people who attended were eager to learn new things, tips and tricks of the PM’s profession, they were curious about best practices and wanted to hear about shared experience from real projects. This was when she realized that by participating in the organization of the PMDAY Conference, the volunteers in the Organization team actually contributed to the development of Project Management community in Bulgaria. “And just like that the PMDAY Conference became my cause”, she admits with a smile.

Svetla elaborates further on the theme for her PMI cause: “Well, you just want to work for it and make it develop and improve”. After the first two years in the Organization team, she wanted to see what it would be to lead that team and the whole organization process. Svetla took that challenge together with Dimitrina Penelova, also a volunteer from the previous year and as it turned out in the next years, the two ladies became good friends. In 2016 when the two of them had managed the conference’s organization, there were not enough volunteers in the team, so each of them had to execute and combine several roles. Svetla worked for speakers’ selection and the development of event’s program, web site configuration and support, sponsorship, and again became a Conference Host. “These were crazy days!”, she recalls with obvious excitement, and continues: “But each year we were raising the bar higher and higher.” And when talking about challenges, Svetla says that they challenged themselves to deliver a better conference – regarding speakers, content, and the experience as a whole, and a larger event – regarding number of attendees, partners and sponsors attracted. Then she adds: “We were so happy to achieve that goal!” 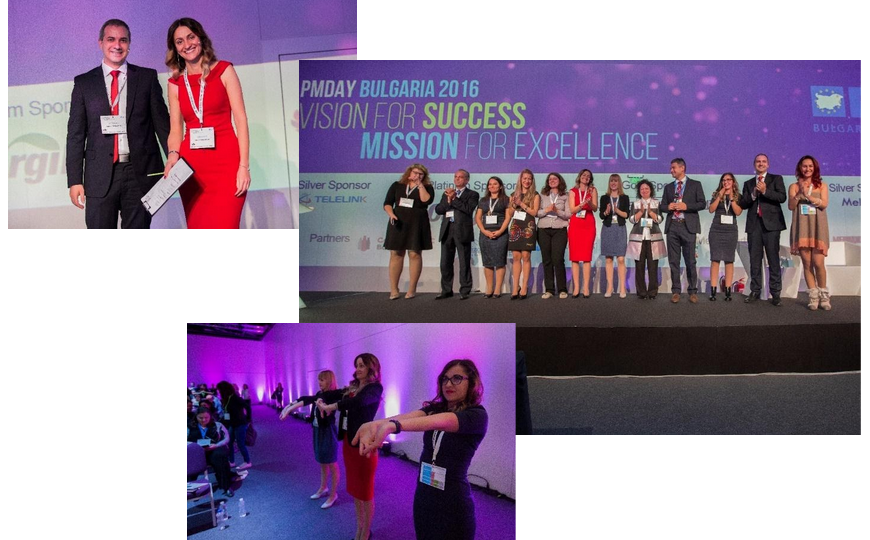 Special moments from PMDAY Bulgaria 2016 Conference
Svetla sees her work as a volunteer as a personal goal and confidently agrees that there are many more things, which have motivated her through the years. “First, for me, as an IT Project Manager”, she starts, “it was a new challenge to participate in a project for organizing a conference”. This completely different area provided her different experience which helped her to improve as a professional. “Second”, she continues, “working with and leading volunteers has its specifics, it is different from working with your colleagues in the office. Volunteers do this in their spare time, they do not receive payment, they are motivated by different things and it is vital to understand it. Sometimes they may not have the time to complete a task, or may not have the skillset”. Svetla admits that all those things made her more understandable, more flexible, and even more creative – in finding ways to complete a task, reach a goal, regardless the limitations. “Last but not least, while being a volunteer, you meet many people, like-minded, you share experience, have fun and make good friends”, Svetla finishes her list of personal reasons for being a volunteer.

Svetla shares how her volunteering experience evolved: “After so many years in the Organization team of the conference”, she replies, “I wanted to transfer all my knowledge and experience to the next Project Managers by being their mentor. In a volunteer organization it is vital to ensure continuity, knowledge transfer and lessons learned for the next team of volunteers because time is precious resource and it is not necessary each time to start the project from scratch”. In Svetla’s opinion, this is also important at a Board level, because Board members are volunteers, too. With great enthusiasm she shares: “My new challenge after being actively involved in the conference organization was to join the PMI Bulgaria Board, first as a Director at Large (DaL) for Sponsorship in 2018 and currently (from 2019, until now), I am in the role of a Vice President for Sponsorship”. Svetla finishes with a joke: “The PMI Bulgaria Board role and the area of sponsorship are another universe for me as a volunteer, but I would share that in my next success story”.

In conclusion Svetla reminisces on her rich experience: “I have one memory from 2016 that really inspires me, even so many years later”, she recalls. “We were brainstorming with the team about the conference’s motto and one of the most favorite ideas was:

Now, on the verge of the 10th Anniversary of PM Summit Bulgaria, which in 2019 gathered 900+ participants and was announced by PMI Global to be the Europe’s largest PMI conference, I truly believe in that simple formula. If you and your team work with passion (have strong motivation, believe in the cause and enjoy the work), the success of your project is just inevitable!”.