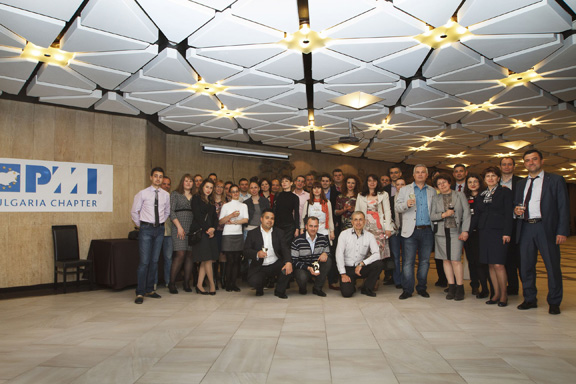 The 5th anniversary of PMI Bulgaria Chapter was commemorated on 21st April in Laura restaurant. A lot of members and friends of the chapter were present. As always, there were lots of surprises. The founding members of the organization received a prize for their contribution and dedication throughout the years. Also, various awards were given out, which caused smiles and applauses.

Five years have passed since the foundation of PMI Bulgaria Chapter – years, filled with hope, positivism, efforts and achievements in the creation of a stable and working organization. All people, who have become a part of the chapter’s family and have actively participated in its initiatives, have certainly felt the magic of the volunteer work, the magic of dedicating oneself to a cause in order for something better to happen. Because PMI Bulgaria Chapter does not simply make Project Management more popular for the business, PMI Bulgaria Chapter gathers the people with interest in this profession, draws them together, teaches them, develops them in various aspects and last, but not least – makes new friendships.

The elections for new Board of Directors is upcoming, the procedure has already started. This event and the competition between the candidates аре expected with great interest, because this will determine the direction in which the chapter will head in the near future.